Hatboxes gets a frum audience

A is an Orthodox Jewish lesbian who lives in a sprawling house in Chicago with many children and animals and occasional others. She has the longest dining room table I’ve ever seen in a real person’s house.  A and I met several years ago through a mutual friend.  I follow her blog posts with interest.

Hatboxes features a frum woman (“frum,” Yiddish: פֿרום, related to the German fromm, meaning "pious" or "devout") coming to grips with major changes in her life, including – maybe – her sexuality.   It's a film I'd like Orthodox women to see, whether they are lesbian or bi or questioning or just interested in seeing Orthodox women on film.  But really, if it can make one lesbian feel a little less alone, then maybe it's done its job.  However, the likelihood of Orthodox lesbians availing themselves of a public screening of Hatboxes seems dim in the extreme.  Fear of exposure is a powerful deterrent.

A had invited me to come to her house so we could talk about Hatboxes for her blog.  We talked for about 20 minutes, and then I told her that I'd brought a screener copy of Hatboxes to watch if she wanted to.  Good Chassidish woman that A is, she doesn't have a TV, so she ran it on her laptop.  She seemed to like it very much and said she appreciated its restraint and the depth of its respect for frumkeit and the research that went into the making of the film. She spotted only one small mistake, but shrugged it off as minor (and no, we’re not saying what it is!). Otherwise..."It was great!"

I underestimated how anxious I was about A seeing it, both as another artist and as an Orthodox Jew.  I worried that we’d gotten things wrong—big things, like its tone or ethos other bedrock elements.  I was relieved that A responded positively with emotions ranging from delight to curiosity to wanting to know what happens next.

We'll keep you posted on when the interview runs.

Posted by Hatboxes (the movie) at 7:42 AM No comments:

Robert Towne's movie Personal Best came out in 1982.  Set between 1976 and 1979, it follows the efforts of two pentathletes as they pursue berths in the 1980 Olympics.  We know what happened there...the Soviets invaded Afghanistan, and the U.S. boycotted the Moscow Games:  "All dressed up and no place to go."

The two athletes are lovers...until they are not.

At the time of the film's release, Coach Terry Tingloff's relationships with the women under his guidance just seemed complicated...sort of unusual, but pretty much shrug-worthy.  And his "I could've been a man's coach!" rant was just funny and true. Or at least truthy.

But then time passes and works its alchemy.  Now, Coach Tingloff taking a bowl of strawberry ice cream out of his charge's hands so he can lay down in her arms isn't compassionate, it's creepy.  Tingloff sneering, "Do you actually think that Chuck Knoll has to worry that Franco Harris is gonna cry 'cause Terry Bradshaw won't talk to him?" sounds whiny and bigoted 31 years later.

This can't be all in the ear that hears.  Taste changes, but these changes seem like something larger and more broadly cultural.

Moreover, the break-up of the women's romance has grown more inexplicable over time as their relationship moved from "necessarily" shadowy and ephemeral to something conceivably permanent.  The closetedness and evasions ring true from the era—trust me—but as a plot element, the relationship flimsiness their break-up depends on is sliding towards nonsense.

The Third-Way message that you can compete and try your best and yet be smart and strategic enough to be generous even as your killer instinct carries you to medal contention continues to resonate, but the sexism and homophobia and blithe predation seem to be going the way of the striped tube sock. A welcome extinction the day it actually happens.

Susana Darwin
Posted by Hatboxes (the movie) at 3:00 PM No comments:

Hot on the heels of the hometown screening at Reeling 31 in Chicago, Hatboxes has been accepted into the 24th Melbourne Queer Film Festival! 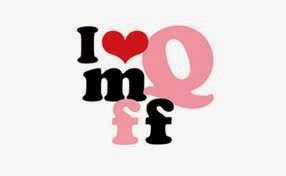 ...as in Melbourne, Victoria, in Australia, not Arkansas or Florida or any of the other Melbournes in the world.

Melbourne of exceptional Italian cafés and the Queen Victoria Market and arresting graffiti...
...and a royal botanic garden that has a catalpa tree that blossoms in November. That Melbourne.

Hatboxes (the movie)
Two women—a lesbian secular Jewish lawyer, and a newly separated Orthodox milliner—meet by chance and discover in each other a life not lived.